Last night, and a bit this morning, we had snow. This is not that unusual for most of you, but it's the first snow we've had in Leeds this winter, which is a little pathetic. It didn't last long, and it wasn't deep (to say the least) but Steph managed to get out there with Maya before it melted and took a few photos. Here's Maya wondering why the flowers have come out while there's still snow: 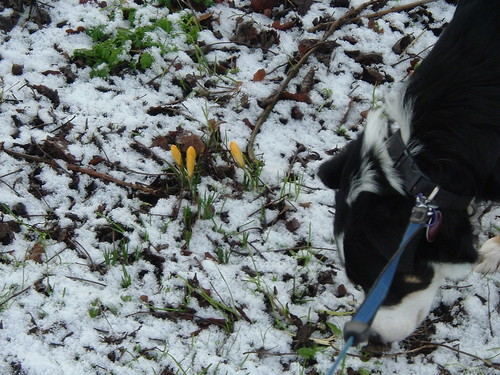 In a fit of boredom last night, we watched an episode of the British SF show 'Primeval'. Dear Heaven! It really was bad. So, if you were in a shopping mall, at night, just the four of you, and it was infested with velociraptors, would you:

a) make sure you were all armed, stick together, and keep an eye out, or,
b) leave two people unarmed, send the unarmed members to wander around alone, leave the unconscious person lying alone on the floor at the other end of the mall, and lay down your weapons out of reach?

Or perhaps you'd send in some trained soldiers, rather than an inept bunch of morons, led by a professor.

Here's a comic strip including velociraptors:

In fact, the show was kind of fun, in a totally moronic way. It was made by people who have obviously seen Buffy and Torchwood, but hadn't actually realised what made those shows work. To enjoy it, you have to be able to completely turn off your natural reaction to characters who act stupidly to allow action and plot to happen, or you have to enjoy shouting at the screen. We went for the latter. We may watch it again, but only if we're in the right mood.

Tomorrow, I have to figure out how they're going to escape from the baddies, sabotage the machine and accidentally destroy the house. Watch this space.

This is just going to be a quick entry, because we're off back to the UK today and I've got packing to do. We haven't done a whole lot since being in Michigan. We've met up with a few friends, spent lots of time in cafes and bought so many books we've also had to buy another suitcase to carry them all back with us. Sadly, I have to go back to work next week, so I'm not sure when I'm going to get a chance to read them all.

In the last couple of days, I've bought:

Can't even remember the rest of the books. It's all a bit overwhelming. Steph bought one about palaces, though, I recall. Surprisingly.

Yesterday, it snowed pretty much all day. Today, it's sunny and bright, but the snow is all still there. Steph has a few photos up on her flickr account. Here's one of me getting snowed on in my giant coat:

Very soon we'll be back with Maya. I can't wait.
Collapse