It's approaching the end of another warm, sunny day here in Florida. It's close on 6 p.m., and it's not even slightly dark yet. We're in a cafe, me drinking green tea, Steph drinking hot chocolate, and they're playing Deep Purple and Whitesnake over the stereo. How cool is this? How can this not be the whole point of life? Sadly, we've only got a couple more days here. Back in England it's now dark, the rain continues to fall and floods are spreading (again). I'm starting to get that feeling I get when vacations are drawing to a close; that enormous reluctance to back to the routine of work and chores.

I don't think I'm really designed for working a 9 to 5 job. Not that my job isn't the best one I could have if I have to be in an office, but what I'm really designed for is a job that involves beaches, cafes and the odd bit of writing (well, more than the odd bit would be ideal, but I'll settle for one or two thousand words a day). If anyone wants to offer a couple of thousand a month for me to do that, give me a call...

Yesterday was another beach day, on Fort Lauderdale beach this time. The weather was beautiful, sunny and warm, but not too hot. There was a breeze, but the sea was relatively calm. We went swimming. Steph--and she omitted to mention this in her blog--was a complete wimp about getting in the water. :) Of course, when she was in, she didn't want to get out again. There were sea gulls and pelicans, and some strange, long-legged big bird that wasn't close enough to identify. I have decided that pelicans are officially very cool. The way they can just seem to hover a few feet above the waves, their wings not moving, as they drift down to settle in the water: that's cool. It's almost magic, as though gravity is for other people.

Tonight, we have left-over Indian food from a surprisingly good Indian restaurant that we went to last night (nothing compared to Mumtaz in Bradford, but then what is?) and we're going to watch House (season 3 DVDs, that Steph bought me for Christmas) later on. If it wasn't for Maya waiting for us, I wouldn't feel the need to go home at all. As it is, we're missing Maya more every day. After a while, you just need your dog, for games and cuddles and playing. I have no idea how anyone manages without a dog.

Okay, as this is a fairly rambling journal entry, I'll ramble to the Sarah Connor Chronicles (I keep wanting to call them the Sarah Jane Chronicles; in fact, that might be cooler: Sarah Jane meets the terminators). Okay, this show isn't bad. It's perfectly watchable. Summer Glau is fantastic as the friendly terminator (even if she's essentially reprising her odd-but-kick-ass role as River from Firefly). The real problems with the show are that, so far, they're just repeating the plot from the movies. To carry a series, they're going to need a lot more than that: more depth, better characters, more ambiguity, more story. The other problem is that John Connor, future 'messiah', is just an irritating, obnoxious teenager. I can't help but think that the sooner some terminator blows him away, the better.  Oh yeah, and the guy playing John's 'father figure' can't act. Other than that...

It's kind of easy to forget it's the middle of January. Not that I don't feel sympathetic to those of you stuck up there in the snow and ice and rain and all that, but I gotta say, I prefer it down here where it's hot. Okay, I don't think I'd want it to be hot and sunny on Christmas--all those Christmas trees lying on the side of the road here in the 80F heat just look sad--but I'm happy not to be in Leeds (currently raining and cloudy, apparently) or Michigan (currently simply cold, I would guess). Instead, we spent yesterday here: 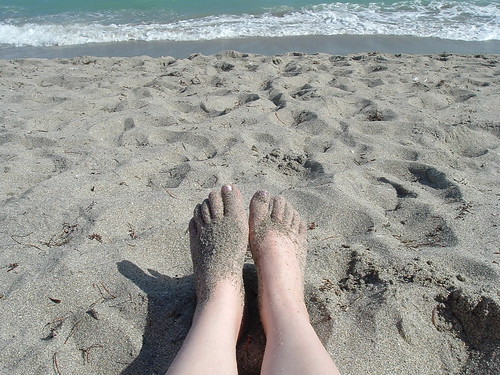 (Those are Steph's feet, and that's the only photo of her she would let me post from yesterday...).

Not sure I'd want to live down here permanently; in fact, I know I wouldn't. There are too many cars and too few nice cafes and bookstores, in summer it would be unbearable, and I just don't like living somewhere where there are so many obscenely rich people. But it's a fantastic break from the long British winter.

We found a new cafe today, which is where I'm posting this from. It's much nicer than the last one (note to previous cafe: if you use styrofoam cups for tea, it is undrinkable: tea should not taste of styrofoam), and they have some decent tea. I'm much happier here.

And, finally, because I can't live without good tea for even a few hours (addiction is a sad, sad thing), I broke down and bought some, along with a nice new cup, with a beautiful china strainer. The strainer, sadly, does a good job of letting the tea leaves through and a less good job of letting water through (how is this even possible?). It's worth it for decent tea, though.

A quick entry today. Here's where we've been sitting, writing: 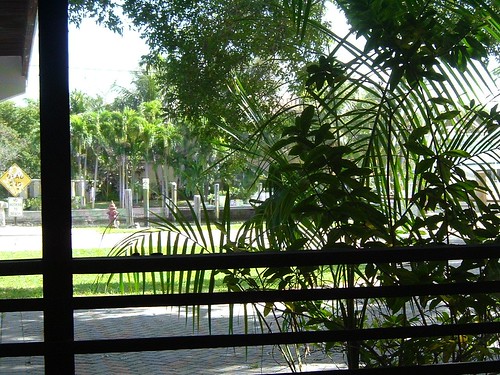 Yesterday, we went to the Apple store and played at looking at our websites on an iPhone. Very cool. Not worth the cost of buying one, but fun to play with nonetheless.

Last night we watched The Ghost Whisperer. Dreadful stuff. Why is it that shows like this, with appalling writing, terrible acting and no imagination don't get canceled, whereas shows like Firefly do? Do people really prefer stuff like The Ghost Whisperer, or is it simply cheap to produce? Also, why is it that to so many Hollywood writers the internet is just a big, mysterious, amorphous, interchangeable mess of magical communication? Is it really so hard to work out how it all fits together and get it even slightly right?

Enough rant for today. We're going to the beach. :)

We are now in Florida, having barely recovered from jet lag in Michigan. No snow here, either. However, it is pretty warm and sunny. We flew in yesterday, which is my excuse for no blog entry. However, we've dragged ourselves out to a cafe with wireless, so here I am, ignoring the sunny weather and palm trees just to deliver your entry today. Later on, if it's not a) too hot, or b) raining, we'll head out for a walk and take some photos.

I am not Tim Wynne-Jones

For a start, I don't have a beard, and even if I did, I still didn't write 'The Boy in the Burning House', although it would have been cool if I had.

See, a year or two ago, I wrote a review of Tim Wynne-Jones's book, 'The Boy in the Burning House', which is a fantastic novel, and posted it on my website and blog. However, I think 'The Boy...' must be an assigned book somewhere, because ever since, I've been getting visitors who've searched on Google for something along the lines of 'book report boy in the burning house', obviously hoping to get an essay out of it (not much hope; it wasn't that detailed a review). Today, however, someone went one better. I got this email, through the website:

Hi. I am currently reading your book 'The Boy in the Burning House'...

So, just to be clear. I am not Tim Wynne-Jones. I did not write 'The Boy in the Burning House'. I have no idea where Tim got his ideas.

No doubt by mentioning the book and Tim's name in this blog entry, I will now get lots of visitors looking here for info for a book report. If you're one of those people, can I suggest that you try reading the book? It's really good. You'll enjoy it. You might even find you've got something to say about it yourself.
Collapse