As may be rather obvious, despite my best intentions, I have stopped using the blog.

If you're interested in still reading my blog entries, you can now find them over on patricksamphire.com/blog

Sorry! I really did intend to mirror blog entries here, but I'm just far too inefficient to keep up two blogs... :)

Note: in the US, this is book is called The City of Death. 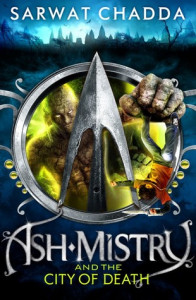 Here’s what I like in a book: action, humour, a cool setting, great characters, and a plot that doesn’t let up. Not to mention hidden compartments containing little dark chocolate liqueurs.

So, how does Ash Mistry and the City of Death stack up?

Well, it doesn’t have any chocolate liqueurs, so that’s a black mark for a start. But it does have the rest of it, and hooray for that!

This is the second Ash Mistry book. Ash is now the Kali-aastra, the weapon of the goddess of death and destruction. Which kind of gets in the way of the normal life he’s trying to lead back in England. He might have thought he’d left behind the great battles between demons and gods that he’d been caught up in in India, but those battles have followed him home.

The Koh-i-noor, a great diamond from the crown jewels has been stolen. But it’s not just any diamond. It was looted from India by the British, and it holds the power of one of the Hindu gods. If Lord Savage, the English sorcerer who murdered Ash’s aunt and uncle and nearly killed Ash, gets hold of it, he may be unstoppable.

So, well, where does that leave us? Right in the middle of a wild adventure full of demons, magic, deadly living statues, and some serious super-powered ass-kicking.

If I had a criticism of the first Ash Mistry book it was that it took a little while to really get going. Well, The City of Death doesn’t have that problem. It’s into the action right from the beginning, and it doesn’t let up.

Ash is a great character, and with the action, sense of fun, and original setting, this is a book well worth reading.

Mirrored from my main blog.

About six years ago, I needed a website. Ah-ha, I told myself. I can make one of those myself. After all, that's kind of my job, making websites and all that.

But, I said (this conversation went on for a long time; I'm summarizing it here...), right now, I don't have the time for it. So, I said (to the accompanying suspicious looks of my co-workers on the next desks), I'll just throw up a very quick website and get onto this next month when undoubtedly I will have lots and lots and lots of free time.

I'm going to cross-post everything from the new blog to my livejournal blog, so keep on reading there if you will.

Well, that took a while. Another website in another six years, everyone? 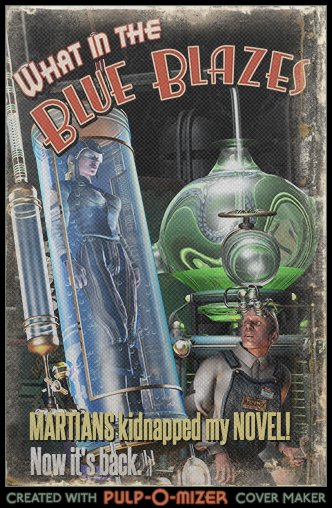 So, some of you may wonder where I've been recently.

Well, as it happens, I've been on a grim interplanetary adventure. No, I didn't get sucked into the John Carter movie (things haven't been quite that bad).

Instead, the Martians kidnapped my lovely debut novel, Secrets of the Dragon Tomb, and I've spent the last few parsecs (yes, I know that's a unit of length, not time) getting it back.

Unfortunately, as a result, the publication date of Secrets of the Dragon Tomb has been bumped back. It won't now be published in Fall 2014. It'll be coming out in Spring 2015 instead.

Still, at least I kicked some Martian butt in the process, so it's not all bad, right?

I've just started to revise my second novel (tentatively entitled The Emperor of Mars, and not due out until autumn 2015, so no panic yet...) and so (because procrastination is easier than actually revising), I've been thinking about exactly what I want this book to be, and I've been thinking about models of authors. Not, like, plastic models, nor the kind of lead figure models we used to make when I was a kid, giving ourselves brain damage from the fumes, but models of the kind of writer I want to be and the books I want to write.

I'm not thinking about the writers I admire most (although I do admire these writers) but of the writers who produce books of the type that mine would be if they reached their full potential. The two writers I've come up with are Rick Riordan (of whom little needs to be said) and Sarwat Chadda, author of the fantastic Ash Mistry series.

What both of them bring that perfect mixture of action, adventure, incredible imagination, pace, great characters, and humour that I want in my books.

There are other writers I admire enormously, as I said, and whose books I snatch up the moment they're available: Jonathan Stroud, David Almond, JK Rowling, Stephanie Burgis, George RR Martin, Brandon Sanderson, Steven Erikson and Ian Esslemont, Pat Rothfuss, and so on, but these aren't people whose books I particularly want to emulate, or at least not right now.

When I was a newt just starting out on the big old writing adventure, I remember hearing the advice that you should write if you can't find what you want to read on the shelves, and you know, that's a perfectly honourable motivation for writing, but for me, well, I can find plenty to read that I love, and even stuff that is exactly like what I want to write, and I find that an even better motivation. Figuring out exactly who my models of writers are gives me far more focus for my revision. It gives me a shape and an aspiration to compare myself against. Either that or it's a fantastic way to waste time when I could be working. Either way, win-win!

The book I'm writing now is the hardest book I've ever written. Honestly. And I think that comes down to one thing:

This is the first sequel I've ever written.

Naively, I assumed that because it was a sequel, it would be so much easier than the first book. After all, I already had most of the characters, right? I've done most of the world-building and the research. I've got the voice and the style. I don't, in general, find plotting as difficult as other parts of writing.

It should be easy. There are a bunch of things I hadn't expected.

Things like lack of freedom with the world, story, and characters that I didn't face in the first book. These people and places are pretty much fixed. This time around, I'm not just making stuff up. It has to be consistent. The first story had a particular structure, and I can't do the next one in a completely different way if I want it to fit.

Things like the fact that, in the first books, most of the characters had pretty complete personal arcs, but now I need them to have new arcs all over again.

I was a pretty big fan of the TV show Revenge. I really loved the first season. But then I watched the first episode of the second season, and I nearly didn't watch anymore. They had done a great job of tying almost everything up in the first season, and then they had to drag it all back up and get going again. In the end, I watched the second episode of season two, and I'm glad I did, because they pulled it back together and mostly succeeded. But it was a lesson, too.

The same was true for the show Alias. I don't know this for sure, but I was pretty certain that the writers had intended to end the show at the end of season 4. But then there was a season 5, and they had to get it all going again. They did a good job, but I bet it wasn't easy.

(And, I bet any season pros are laughing at me for this, because you've been there before. Still, pity poor me...) 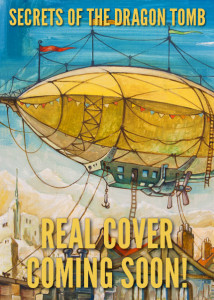 So, you all know I've got my debut novel out in 2014, right? Of course you do. I bet none of you have been thinking about anything since.

Anyhoo... I joined up with the appropriate debut group, OneFourKidLit, which, as the name kind of suggests is a group of Middle Grade and YA authors who have their first novel published in 2014.

If you know me, you'll know I can't leave anything well enough alone, so I volunteered to overhaul the group website, and the overhaul is now done (onefourkidlit.wordpress.com).

Anyhoo, part two... To celebrate this, we're doing a big giveaway of books for readers and, for aspiring authors, critiques of chapters of novels and queries.

Full details of the giveaways.

The giveaways are open until May 31st midnight EST.

Anyway, if you fancy spreading the word, I'd be embarrassingly grateful.

Today I have been mostly blogging on this group blog.

Ever since I sold Secrets of the Dragon Tomb back in December, the thing I've been most ridiculously excited about is seeing the cover. Even more so than the interior illustrations (and you would not believe how excited I am about them...)

Now, I know that it's going to be ages until I've got a cover. The publisher has to hire an artist, work with them on what the cover is going to be, go through revisions, approvals, input from marketing and sales and so on and so on.

Every time I take a look on goodreads, that sad blank, grey cover looks back at me, mocking me.

Well, I'm afraid I gave in.

I bought a rather nice image on a stock photo site, cropped it, and slapped some text on. 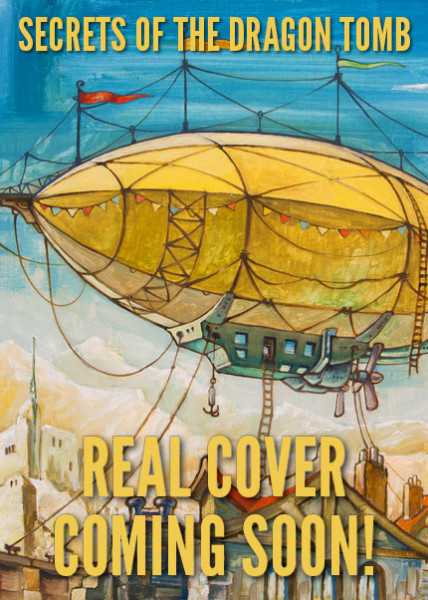 I was tempted to spend ages making it look like a real cover, but Steph quite sensibly gave me dire warnings about the confusion that it might cause.

So, it doesn't look like a real cover. But at least when I look at goodreads, I don't have that horrible blank giving me the evil eye.

And if you're on goodreads, feel free to add the book: http://www.goodreads.com/book/show/16172967-secrets-of-the-dragon-tomb ;)

For those of you creating and formatting your own ebooks, my blog series explaining it all in mind-numbing detail continues: